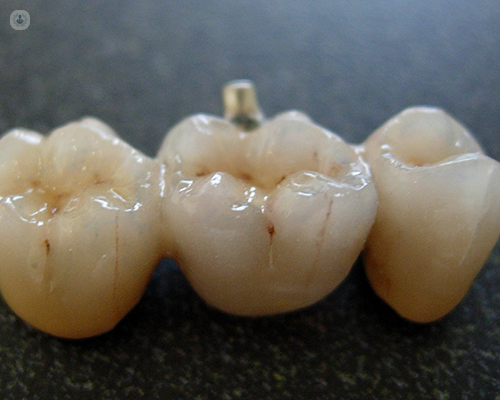 What is fixed prosthodontics?

Fixed prosthodontics (also known as “indirect restorations”) is an area of dentistry that involves replacing teeth with fixed dental prostheses.

There are various kinds of fixed prosthodontics:

Why is it done?

Fixed prostheses are used to replace lost or damaged teeth, providing the patient with a fixed tooth with which they can chew and speak normally, providing the same functions as a normal tooth. They also restore a pleasing aesthetic appearance.

What does fixed prosthodontics consist of?

Fixed prosthodontics are typically made in a laboratory after the dentist takes an impression (mould) of the patient’s teeth so that the prostheses are made to fit each specific patient. Once the prosthesis is created, it will be placed in the patient’s mouth by the dentist.

Part of the remaining tooth structure usually has to be removed to make room for the thickness of the prosthesis. The amount that must be removed depends on the material of that prosthesis.

Care after the intervention of fixed prosthesis

The care after the intervention depends on the type of prosthesis that will be placed on the patient. After the procedure, the patient should eat soft foods, avoiding hot or particularly cold food, as their teeth may be sensitive.

This website uses cookies to improve your experience while you navigate through the website. Out of these cookies, the cookies that are categorized as necessary are stored on your browser as they are essential for the working of basic functionalities of the website. We also use third-party cookies that help us analyze and understand how you use this website. These cookies will be stored in your browser only with your consent. You also have the option to opt-out of these cookies. But opting out of some of these cookies may have an effect on your browsing experience.
Necessary Always Enabled
Necessary cookies are absolutely essential for the website to function properly. This category only includes cookies that ensures basic functionalities and security features of the website. These cookies do not store any personal information.
Non-necessary
Any cookies that may not be particularly necessary for the website to function and is used specifically to collect user personal data via analytics, ads, other embedded contents are termed as non-necessary cookies. It is mandatory to procure user consent prior to running these cookies on your website.
SAVE & ACCEPT